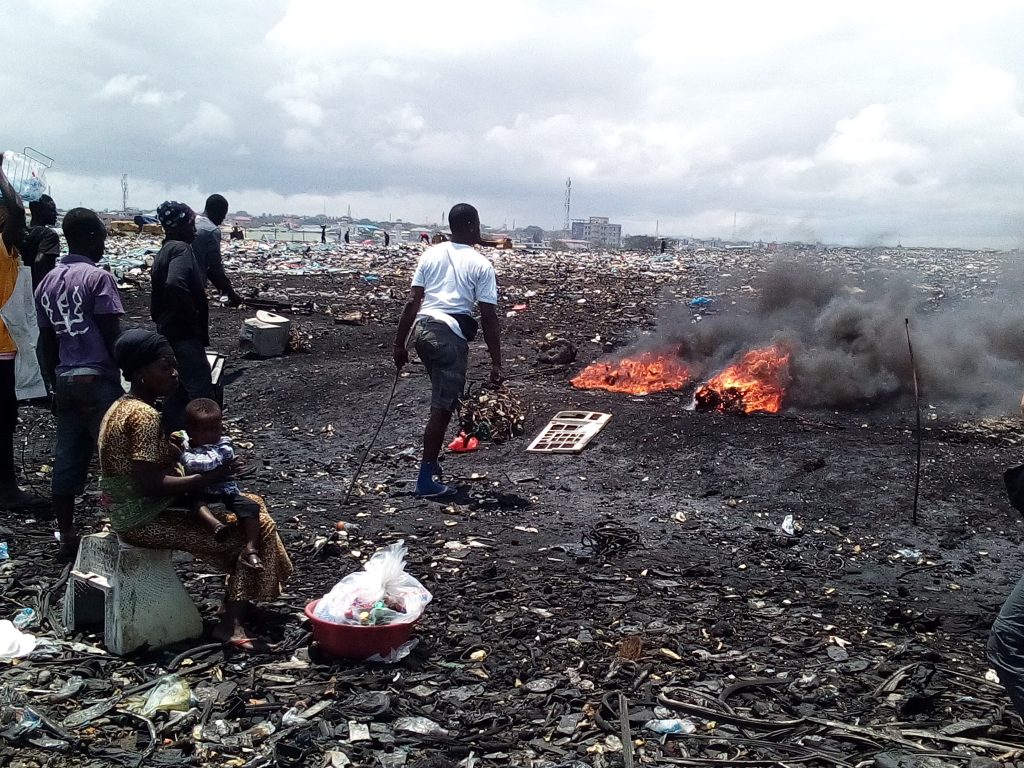 Agbogblishe, one of the largest electronic dumping sites in the world, is situated in Accra, the capital of Ghana. Its name refers to the neighbourhood where it is located, being in the centre of the city. People from various locations, often from the north of the country (where the population have the least resources), come in search of a job, as their only way to survive.

On June 28, 2021, Henry Quartey, “Greater Accra Regional Minister”, ordered the dismantling of Agbogbloshie within his “Let’s Make Greater Accra Work” agenda. Starting with the onion traders at the neighbourhood market and the scrap dealers at the landfill, this campaign aims to phase out the current activity in Agbogbloshie, and move it to Adjen Kotoku at 30 km in the north.

The police have entered Agbogbloshie using tear gas and rubber bullets to disperse the merchants who riot in the neighbourhood. They have ordered the immediate evacuation of the merchants, demolishing everything with bulldozers, and broadcasting with pride what they call “taking possession of Agbogbloshie” on social media and the press.

Agbogbloshie is considered to be a circular economy centre. However, the conditions in which people work recycling are deplorable. Without protection or appropriate means to guarantee proper recycling, these people are exposed to toxic manipulation that, frequently, ends up causing very serious damages to their health. Very young people, including children, recover heavy metals from the landfill to resell them. There are also many women and girls who mainly sell food and water to the workers, washing and extinguishing the fire from the burning of wiring. The burning of this waste makes the population that spends their day in Agbogbloshie continuously breathe a cloud of toxics air. This is reflected in the high levels of heavy metals in their blood and urine, as well as respiratory, skin, cardiovascular diseases and cancer. This situation not only affects the people of the landfill itself, but everyone around them: the fruit and vegetable market, schools, temples and houses. In addition, Agbogbloshie also creates an environmental disaster, since the river and the animals in the area are totally contaminated by the electronic waste.

Despite all of this, it should be noted that Agbogbloshie’s landfill and its surroundings constitute the livelihood of thousands of people in the area, without which they would be doomed to an even greater precarious situation. That is why the immediate dismantling of the landfill puts the people who work there and in the market area in a situation of great vulnerability.

We call for an end to the violence carried out by the Agbogbloshie dismantlement and relocation campaign, ensuring that the displacement to Adjen Kotoku leads to an improvement in the working conditions of all people, the community and the environment.

There is a large population from which the government is taking away the little they have, demanding an immediate abandonment of their current way of life. The local government of Henry Quartey must guarantee security, in a totally peaceful process where the human rights of all the people of Agbogbloshie must be respected. The new Adjen Kotoku facilities must ensure fair working conditions and minimize current social and environmental impacts.

We may think that Agbogbloshie’s crisis is a local problem, but its roots extend beyond Ghana. The current electronics production and consumption model ends up having very serious consequences in the Global South. Therefore, what is happening in Agbogbloshie is a global problem.

Moreover, the case of Agbogbloshie is not an isolated case. According to the latest data, 53.6 million tons of electronic waste were generated in the world during 2019, of which only 17.40% were properly recycled. There is considerable uncertainty about a significant amount of e-waste that ends up in illegal traffic sent to countries like Ghana, where there are no resources to recycle properly.

In front of a global problem, we demand a global solution. All parties involved have to be accountable: manufacturers, political institutions, public administrations and consumers. By denouncing what is happening in Agbogbloshie, we want to make visible the multitude landfills in impoverished countries that receive electronic waste from the Global North. The Basel Convention that regulates these illegal movements must be complied with and audited, avoiding the export of toxics to those who precisely generate the least.

As consumers, we must not forget that the solution is not only to recycle properly where it has been generated, but that the main objective is to reduce our consumption, as well as to divert our efforts to repair and reuse.