Planning to buy a smartphone, an e-bike or any other product that includes a rechargeable battery for Christmas? This new research, carried out by the Right to Repair campaign in collaboration with the EEB and the University of Lund shows that most batteries in today’s products cannot be easily removed, replaced or repaired, resulting in shorter device lifetimes, a loss of rare and valuable materials and billions in unnecessary consumer expenditure.

Yet, at a time when Europe claims to be a leader on climate and sustainability issues, too many batteries are either non-replaceable or non-repairable resulting in shorter product lifetime, increased electronic waste, loss of critical raw materials and unnecessary expenditure for consumers.

These are some findings of a report released today by the European Environmental Bureau, the Right to Repair campaign and researchers at the University of Lund.

Whenever a battery’s performance slows down, it doesn’t mean the whole device should be discarded. Repairing or replacing it enables consumers to keep using their product, preventing unnecessary e-waste and the purchase of a replacement. Yet, the research has found that many challenges exist to access batteries to replace or repair them. 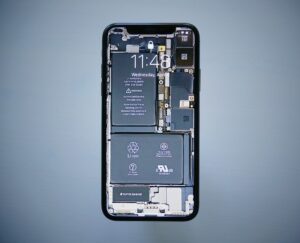 Replaceable batteries: good for the planet, good for people

The study found that battery failure is one of the most common problems for many consumer electronics and often the first component to fail in e-bikes and scooters. 42% of smartphones and 27% of laptops repairs are related to battery replacement.

“This is extremely worrying as the average battery life for these products is around 3 years and the majority of repairers we talked to said that the risk of damaging a device while removing the battery has increased. This suggests that a significant number of devices are being prematurely discarded due to battery failure”

In contrast, the benefits of replaceable removable batteries are numerous. For instance, if all new phones and tablets sold in the EU in 2030 had easily removable and replaceable batteries, 674,834 tons of CO2 could be saved, €19.8 billion wouldn’t be spent as a result of the unnecessary replacement of 39 million devices, and critical raw materials urgently needed for the energy transition such as cobalt and indium would not be lost.

Similarly, making batteries easy to remove would increase their collection rates and reduce the safety risks associated with recycling. Currently, it is estimated that 80% of batteries at waste facilities are removed manually and recyclers report that battery removal has become increasingly complicated, resulting in lower removal and recycling rates.

Another consequence of the increased difficulty of removing batteries is the number of fires at recycling facilities. A recent report  on the scale of fire incidents in the EU that surveyed over 100 companies from 20 countries found that 1/3 of recyclers surveyed reported very serious fire incidents in connection with defective batteries. This is why a coalition of electronic and battery repairers, the recycling industry and environmental NGOs representing at least 500 organisations published a joint statement today calling on the European Commission to take action for more removable, replaceable and repairable batteries in the forthcoming battery regulation.

Indeed, timing is critical. The European Commission has proposed a “Battery regulation” that aims to tackle the whole lifecycle of batteries from the supply chain to its disposal, in a bid to make them more sustainable. The proposal, currently in the hands of the European Parliament and Council, addresses the removability of batteries but does not address key issues such as: including light electric vehicles in the scope, addressing spare parts availability, preventing software locks and avoiding unnecessary exemptions and loopholes.

“While there are many companies working to replace, repair and recycle batteries from electronics like smartphones and e-bikes, poor product design and software are making this increasingly challenging or impossible. Manufacturers are wasting precious resources and forcing consumers to replace devices before they need to. The European Council and Parliament now negotiating the European Batteries Regulation have the power to address all of these issues.”

Photo by Frankie on Unsplash